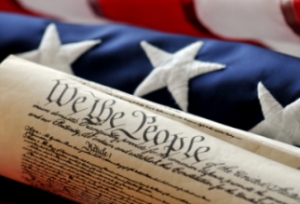 The US Constitution guarantees marriage equality for the US, the Supreme Court ruled this past Friday, June 26, 2015.

What’s interesting is that we Mormons have the world’s only scripture that declares the US Constitution to be established by God. This is significant because the US Constitution is one of the first to balance majority rule with minority rights, that is, to protect freedom of religion and freedom of conscience and to facilitate tolerance and coexistence of diversity. The Lord is speaking here, by revelation, to the persecuted Saints: “And again I say unto you, those who have been scattered by their enemies, it is my will that they should continue to importune for redress, and redemption, by the hands of those who are placed as rulers and are in authority over you — According to the laws and constitution of the people, which I have suffered to be established, and should be maintained for the rights and protection of all flesh, according to just and holy principles; That every man may act in doctrine and principle pertaining to futurity, according to the moral agency which I have given unto him, that every man may be accountable for his own sins in the day of judgment. Therefore, it is not right that any man should be in bondage one to another. And for this purpose have I established the Constitution of this land, by the hands of wise men whom I raised up unto this very purpose, and redeemed the land by the shedding of blood.” (D&C 101:76-80)

To be deeply Mormon is to be deeply pro-gay.  Maybe not according to superficial appearances, but the deepest principles of the restoration really do secure freedom, rights, liberty, and privileges to everyone in this divinely-blessed country.  In fact, the Mormon tradition has been arguing that the US Constitution supports liberty for alternative marriage structures since the 19th Century!!!

According to LDS Scriptures, God loves constitutional guarantees of minority rights, and that applies to marriage equality, too: “And that law of the land which is constitutional, supporting that principle of freedom in maintaining rights and privileges, belongs to all mankind, and is justifiable before me. Therefore, I, the Lord, justify you, and your brethren of my church, in befriending that law which is the constitutional law of the land” (D&C 98:5-6).

Latter-day Saints will have latter-day thinking.